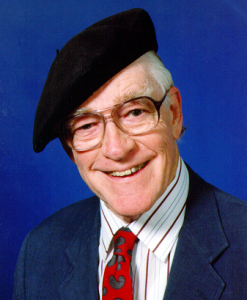 When born on a ranch in arid central Kansas in February of 1922, John O. Corliss had never heard of a protozoon or a protist; yet on his retirement from the University of Maryland in 1989 a pair of his colleagues whimsically proclaimed “Young John was precocious, he spoke, even swore/and wrote his first paper before he was four”. At age seven, JOC moved with his family to Vermont where he had most of his schooling including attendance, interrupted by World War II, at the University of Vermont (UVM). After serving as an Air Force meteorologist in Africa and Italy for three years, he returned to UVM for his B.A. (summa cum laude), married, and entered grad school at New York University (Bronx branch). At NYU, he soon perceived that the light at the end of the tunnel was emanating from the emerging field of tetrahymenology. He quickly becomes a devoted disciple of Richard P. Hall, already well known for training one of the largest groups of budding protozoologists in America, and initiated his dissertation on systematics of Tetrahymena.

When the renowned ciliatologist Professor E. Fauré-Fremiet visited NYU, he kindly invited JOC to spend a year with him in Paris. Determined to do so, Corliss hurriedly typed up his thesis (while feeding his second daughter her 2 A.M. bottles) and applied for an overseas postdoc fellowship. Following completion of his Ph.D. in 1951, young Dr. Corliss was off to the Collège de France, Paris. His genial French mentor must have been astonished when John burst into his lab at the end of August, announcing with typical Corlissian enthusiasm, “Bonjour, mon Patron, je suis enfin ici”! There is no doubt that the 12 months spent with “Monsieur F-F” in Paris and Concarneau set Dr. C. on an irreversible career path in ciliate systematics, morphogenesis, and evolution. He returned often to France. On the occasion, in 1973, of his being awarded an honorary doctorate by the University of Clermont, JOC bought the French beret from which he has been inseparable ever since [see photo].

Back in the USA, Dr. Corliss’ first academic appointment was at Yale University, as a successor to L.L. Woodruff. JOC was following in the footsteps of Vance Tartar, the Stentor morphogeneticist, who was a Ph.D. under Woodruff and had taught for a while at Yale. It is interesting that John had also been a work-study student under Tartar, when the latter was on the faculty at Vermont before WWII. At Yale, Corliss collected the manuscripts (and the money!) for publication of Vol. 1, No. 1 (February 1954) of the Journal of Protozoology, which was subtitled “The Woodruff Memorial Issue”. Soon thereafter, Dr. C. moved on to the University of Illinois (Urbana) to replace the retiring R. R. Kudo. There he directed the M.S. and the Ph.D. researchers of more than 20 students, among them Dick Albach, Jacques Berger, Jon Culbertson, Margaret Dysart, Sid Kantor, Gene McArdle, Bill McCaul, Don McLaughlin, Jerry Paulin, David Shomay, Dan Stern, Walter Wilhelm, Ayere Yusa, and Bill Zebrun.

After a decade on the Urbana campus, JOC accepted the headship of Biological Sciences at the newly built University of Illinois at Chicago Circle. Six years later (the last of which he was on leave to Washington, D.C., where he served as Program Director of Systematic Biology at the National Science Foundation), he moved East to chair Zoology at the University of Maryland, College Park. In Corliss’ 18-year reign at Maryland, his principal contribution to the growth in stature of the Department (Zoology moved nationally from 42nd to 10th during his tenure) was most likely his zeal and success in conning bright young Ph.D.’s to join the staff. He concentrated on building up Maryland’s research reputation in the field of ecology, while not neglecting cell biology. He also recruited an internationally recognized group of faculty working with protozoological material.

Along with administration, teaching graduate-level protistology courses, directing the research of two Ph.D. candidates (Diana Lipscomb, Tom Nerad), and participating in numerous professional activities, Dr. C.’s other principal interest was editing. He was Editor of TAMS (Transactions of the American Microscopical Society) from 1966 to 1980, Managing Editor of The Journal of Protozoology (1981-1983), co-Editor of Progress in Protistology (1985-1989), a co-Editor of Evolutionary Protistology: The Organism as Cell (1984), a co-Editor of The Handbook of Protoctista (1990), and co-Editor of Vol. 1 of Microscopic Anatomy of Invertebrates (1991). He has also served as a member of editorial boards of some 10 journals, many published by non-USA-based biological societies. John had an early start in such activity, producing his high school magazine and editing UVM’s Cynic in his collegiate days. One of his most coveted honors is the Council of Biology Editors Meritorious Award, received in 1982.

Dr. C.’s participations as an officer and committee member of various societies are too numerous to list here. He has been president or chair of more than half a dozen major groups over he years; and he has long been a Commissioner, and now a Councilor, of the International Commission on Zoological Nomenclature. His numerous accolades and awards include honorary memberships in several national and international societies. He has survived departmental reorganizations, wars, depressions and recessions, two wives, three daughters’ marriages, and one quadruple cardiac bypass. Professor Emeritus (UMD), he now resides happily near Philadelphia where, in his breaks from science, he enjoys his time as docent at the Zoo!

Dr. Corliss is an indefatigable collector of protistological books: without doubt, he has assembled one of the greatest libraries in existence in that area. His special pride and joy is an original copy of O. F. Müller (1786), a generous gift from the late L.E. Noland. If you add to his books, monographs, and reprints the scores of drawings and photographs that he owns, you can better appreciate his passionate love for the history of protozoology, a subject on which he has published several papers and hopes some day to write the definitive story.

Inspiration for THE JOHN O. CORLISS CILIATE SYSTEMATICS AWARD and endowed fund came from a group of his former graduate students headed up by Drs. Eugene W. McArdle and Margaret Dysart de la Torre. A cash prize is presented to a young protozoologist for what is judged to be the most meritorious publication in ciliate systematics during a given year. Members of all sections of the Society who are 35 years of age and under, or over 35 and within five years of the Ph.D. or equivalent terminal degree, are eligible for the award. Manuscripts to be considered may be of any length and published in any appropriate journal. However, the award will be restricted to sole authorship papers or multiple authorship manuscripts where the nominee is the senior author and can be clearly identified as the principal contributor. [Excerpted from John Corliss’ CV, Jacques Berger’s February ’92 encomium in the Journal, and personal recollections of his students and friends].