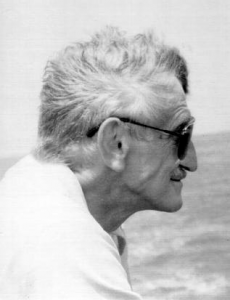 Robert L. Conner was born on February 3, 1927, in Wabash, Indiana. Growing up in the Midwest, he developed an appreciation for catfish, blue gills, and “corn.” Before finishing his senior year in high school, he volunteered and joined the Navy (to avoid being drafted into the Army). Thus, during WW II, he became a world-traveller while defending democracy and “hiding behind WAVES.” He took advantage of his G.I. Bill-of-Rights-paid college tuition at Washington University, St. Louis, where he received his A.B. degree in zoology in 1949, with a minor in chemistry.

Having seen the world, he decided to stick close to home in the Midwest and selected Indiana University in Bloomington for his graduate studies. In the Department of Zoology, he found himself in the company of other students, such as C. Miller and J. D. Watson, and professors, such as T. Sonneborn, who was already well known for his studies on Paramecium genetics. Although Conner was intrigued with protozoa, his interests were clearly in biochemistry and he became convinced by W. van Wagtendonk, who espoused the idea that biochemical analyses of an organism were meaningless unless they were grown in pure culture. So, Conner joined van Wagtendonk’s lab, which was committed to the development of an axenic, then chemically defined, culture medium for Paramecium. He helped screen everything on the chemical shelf and from grocery stores and found a growth promoting factor in lemon juice (thereby obtaining the fringe benefit of an unlimited lemonade supply). He then identified the factor as a sterol and determined that stigmasterol, poriferasterol, and sitosterol were what the organism could use best for growth. From this discovery his interest in hard-core lipid biochemistry and metabolism of these compounds naturally evolved, an interest that was sustained throughout his research career.

After completing his Ph.D. degree in 1954, Conner accepted a position as Assistant Professor of Biology at Bryn Mawr College. Six years after his initial appointment, he was promoted to Associate, then, after another six years, to Full Professor. In 1967, he served as Acting Chairman of the Department of Biology and later Chairman (1968-82). Being in a “Seven Sisters” institution meant having an elite and highly talented clientele. The students offered him healthy challenges and Conner kept ahead of them by keeping up with the latest in the literature in all fields of biological research, maintaining his lectures and labs up-to-date at all times. With crooked arm, holding his pipe, and leaning back in his chair, he developed the ultimate “professorial” style—deep voice, slow speech, and, later, peering over his reading glasses.

Bryn Mawr, as one of the “Seven Sisters”, is unusual in that it also has a graduate program, hence research activities are just as important as classroom teaching. Conner mentored 18 Master’s theses and 23 Ph.D. dissertations. In this too, he excelled, competitive with any of the big labs of large universities in productivity, discoveries, and ideas. In his first two years at Bryn Mawr, he was awarded Lalor Faculty Fellowships that helped launch his own research lab. Soon after setting up shop, he discovered that, in contrast to working with Paramecium, it was less frustrating and less expensive to work on Tetrahymena, the “weed of the protozoa.” Thus most of the work done in his lab from then on was on this ciliate. He was known as a careful investigator, broadly knowledgeable, with a critical, or “tough” mind. His major contributions may be regarded as his work on lipids: he discovered the sterol-like tetrahymanol in Tetrahymena as well as two fatty acid desaturase pathways that explained compositional changes in response to temperature shifts, desmosterol as the end product of sterol metabolism in L-cells, and numerous aspects of lipid metabolism. He also investigated nucleic acid, carbohydrate, and phosphate metabolism and cellular uptake mechanisms. His work on tetrahymanol led to the 1970 Bond Award from the American Oil Chemists’ Society.

The year 1961–62 was spent with F. Ungar at the University of Minnesota as a USPHS fellow. The major studies there were on sterols, but he did wander off on a slight tangent and discovered F. Halberg and circadian rhythms. All other sabbatical leaves were in lipid labs in Philadelphia where he became a close collaborator of colleagues at the Wistar Institute (D. Kritchevsky) and the Medical College of Pennsylvania (G. Rothblatt). As a result, a steady stream of students (and a technician, J. Landrey) flowed from his lab to downtown Philadelphia.

The bonds with the lipid biochemists in Philadelphia were strengthened by his invaluable service to The Journal of Lipid Research as an associate editor (1983-86). The others on the editorial board took advantage of his strengths as a generalist and very soon he became the “garbage can” who cheerfully agreed to review the “chicken skin, Atlantic krill, etc.” manuscripts – because he simply knew something about everything. Other editorial activities included serving on the Board of Reviewers of The Journal of Protozoology (1969-87), and the Federation Proceedings (1974-77). Conner’s activities included Fund for Science Education, Inc., Review Board (1971) and membership in the American Society of Biological Chemists, Sigma Xi, Society for General Microbiology, and Society of American Zoologists.

Involvement with teaching, administrative duties, and research over the years, however, did not take all of his time. Full of energy, he also regularly played a good game of tennis, went boating and fishing, gardened, took a group of people on a rubber raft trip shooting the rapids down the Colorado River, and participated in many other sorts of outdoor activities.

Conner served the Society of Protozoologists in many capacities; committees (Executive, 1967-84; Membership, 1971; Special Publications, 1971) and President (1974-75; 1975-76). He was awarded the Society’s Annual Ciliate Cravat Award for Outstanding Work in Ciliate Research in 1970. He was responsible for initiating symposia at the Society’s Annual Meetings and himself convened two major symposia. He also served as a member in cognito of the Awards committee headed by his close colleague, friend, and fellow “grease” chemist, G. Holz (1982-87). When attending the annual meetings, he had his students with him, several of them taking home the coveted Jahn Award for best paper by a graduate student. His wife Audrey, a co-founder and faithful “Proto Pal”, also accompanied him to these meetings. Bob passed away of cancer on September 3, 1990.

In recognition and appreciation of his direction, leadership, and impact on the Society and to honor him, THE GEORGE G. HOLZ, JR. AND ROBERT L. CONNER TRAVEL FUND was created in 1990 by Edna S. Kaneshiro (his former postdoctoral associate) and Howard E. Buhse, Jr. The endowment is to provide travel awards, especially to students and young investigators, to assist them in participating at meetings of the Society. Awards will be made at the discretion of the Awards Committee of the Society, a committee on which both honorees faithfully served for many years.