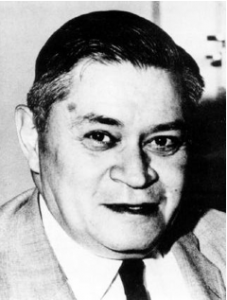 Theodore (Ted) was born in New Orleans, Louisiana, on December 17, 1905. His family moved to Beaumont, Texas and later to Houston where Ted grew up, although he often referred to himself as a “Louisiana Frenchman”. The family knew hardship, and, as the eldest son, he worked at whatever he could as a growing youngster and teenager to help support himself and the family. This strong working habit continued for his lifetime.

An excellent student, he won a 4-year academic scholarship at Rice Institute (now Rice University) where his interest in biology began under the influence of Asa Chandler and especially Richard P. Hall. After graduating with distinction, Jahn followed R. P. Hall to New York University where he did his graduate studies, with Hall, on the physiology and axenic culturing of Euglena gracilis. He received the M.S. in 1928 and Ph.D. in 1931. In July, 1931, he married a fellow student, Frances Floed, who proved a loving and working partner until his death on May 1, 1979. Together they wrote the widely used handbook How to Know the Protozoa (1949; 2nd ed., 1979, with E.C. Bovee).

From NYU, Dr. Jahn went to Yale University as a National Research Council Fellow at the Osborn Lab, where he taught protozoology for a year while Lorande L. Woodruff was on leave. In 1934, he went to the University of Iowa as a research associate to study grasshopper physiology. He left Iowa in 1948 as Associate Professor of Zoology to accept a Professorship at the University of California at Los Angeles. The next year he was named Chairman of the Department of Zoology, a position he held until 1958. As Chairman, he more than doubled the size of the Department’s faculty and physical facilities and the Department rose in ranking to among the top five in the nation. He remained at UCLA for the rest of his life as Professor, then Professor Emeritus, actively teaching, working with graduate students, and conducting his own research. Dr. Jahn was the mentor of 34 doctoral students and as many masters’ students. During his 50-year research career, he authored and coauthored nearly 200 publications that included scientific articles, reviews, popular scientific articles, articles in encyclopedias, chapters in books, letters to editors, and a book.

As a teacher, Dr. Jahn gave stimulating, lucid, and accurate lectures that sparkled with wit and humor. He knew many of his scientific peers personally and made them, by anecdote, living participants of his lectures – with their foibles (without denigration) as well as their accomplishments. He was a determined opponent of illogical and inaccurate dogma and he attacked it vigorously in his teaching and research. He detested bigotry and accepted students for themselves without regard to race or other backgrounds.

Dr. Jahn’s scientific interests were broad. Besides his extensive contributions to protozoology (e.g., taxonomy, physiology, biochemistry, life cycles, ecology, behavior, and locomotion), he also worked with insects (e.g., vision, diurnal rhythms, cardiology, neurophysiology, visual electrochemistry, and permeability of eggs). His major interest was in physiology. He proposed theories of redox potentials, membrane transport, imbibition of water into cells, piezoelectric movements of ions in flagella and bone – the latter resulting in the development of an electrical method of healing fractured bone, and the application of the Gibbs-Donnan equilibrium to physiological phenomena such as ciliary reversal, cytoplasmic contraction, and water flux in cells. He also studied contraction of cytoplasm in response to electrical stimulation and developed a hypothesis based on an ion-exchange mechanism. With several of his graduate students, he investigated the patterns formed by dense populations of swimming microorganisms and developed a hypothesis to explain the phenomenon. At the time of his death, he was working on a hypothesis to explain the formation of coral reefs based on mechanical, geological, and biochemical considerations.

He extended the use of motion-picture cameras and pioneered the use of high -speed (up to 1,000 frames/sec) missile-tracking cameras to cinematography of locomotion in protozoa. He thus documented amoeboid movements of all types, flagellar and ciliary movements, movements of sporozoan trophozoites, spirochetes, bacteria, and spermatozoa. He photographed the events occurring in the contractile vacuole systems of protozoa.
Dr. Jahn was an active member of several scientific societies. He was a co-founder of the Society of Protozoologists and drafted its first constitution. He was the Society’s first Secretary-Treasurer (1948-49), and also served as Vice-President (1949) and President (1952-53). He also served on several committees and on the Editorial Board of The Journal of Protozoology and was elected to honorary membership of the Society in 1973.

Dr. Jahn also served as Vice-President (1949-51) and President (1954) of the American Microscopical Society and was elected to honorary membership in that society. He was President (1969-70) of the Western Division of the American Association for the Advancement of Science, President (1972-73) of the Western Society of Naturalists, and Treasurer (1953-56) of the American Society of Zoologists. He served as Trustee (1963-69) and President (1966) of the Board of Trustees of Biological Abstracts, in which role he negotiated the acquisition of that organization’s present building and helped initiate the development of its computerized BIOSIS program. He also served on Fulbright awards committees, and on grant proposal review panels for the National Institutes of Health, the Office of Naval Research, National Science Foundation, and the National Atmospheric and Space Authority. For his achievements, he received an Award of Merit from the Iowa Academy of Science, a Distinguished Alumnus Award from NYU, and in 1979, he was nominated for a Distinguished Service Award of the American Institute of Biological Sciences.

In Los Angeles, he was an active member and served as President of the Committee for Advanced Science Training, an organization that sponsored summer research opportunities for promising high school students. He was presented an award of merit from this organization for his efforts in inspiring and recruiting young people into the sciences. A highly gregarious man, Ted Jahn had a special talent for generating and maintaining friendships, giving freely of his time, help, and advice to students, colleagues, and friends, of which he had many.

The Theodore Louis Jahn Fund was established in 1978 for the Society of Protozoologists by Dennis E. Buetow and Eugene C. Bovee. In 1999, the Society renamed the fund the Theodore L. Jahn and Eugene C. Bovee Fund, after a significant donation of royalties to it by Eugene Bovee. The endowed fund is used to support a prize, THE THEODORE L. JAHN AND EUGENE C. BOVEE AWARD, to a graduate student of the Society who is judged to have presented the best research paper for that year at the annual meetings of the Society. The Awards Committee of the Society arranges the judging of eligible presentations. The Award is presented at the annual luncheon or banquet of the Society. The student can use the award for support of travel to a scientific meeting, publication costs, and/or research costs as he/she chooses. [Excerpted from Bovee, E. C. 1979. J. Protozool., 26:527–529, and Society of Protozoologists’ archival documents].